Changed on 08/06/2022
Startup winners of the Trophée Startup contest of the years 2020 and 2021 will be able to capitalize on their prize and will travel to France to accelerate their startups and begin their internationalization process in Europe. The initiatives are focused on caring for the environment and mitigating climate change. 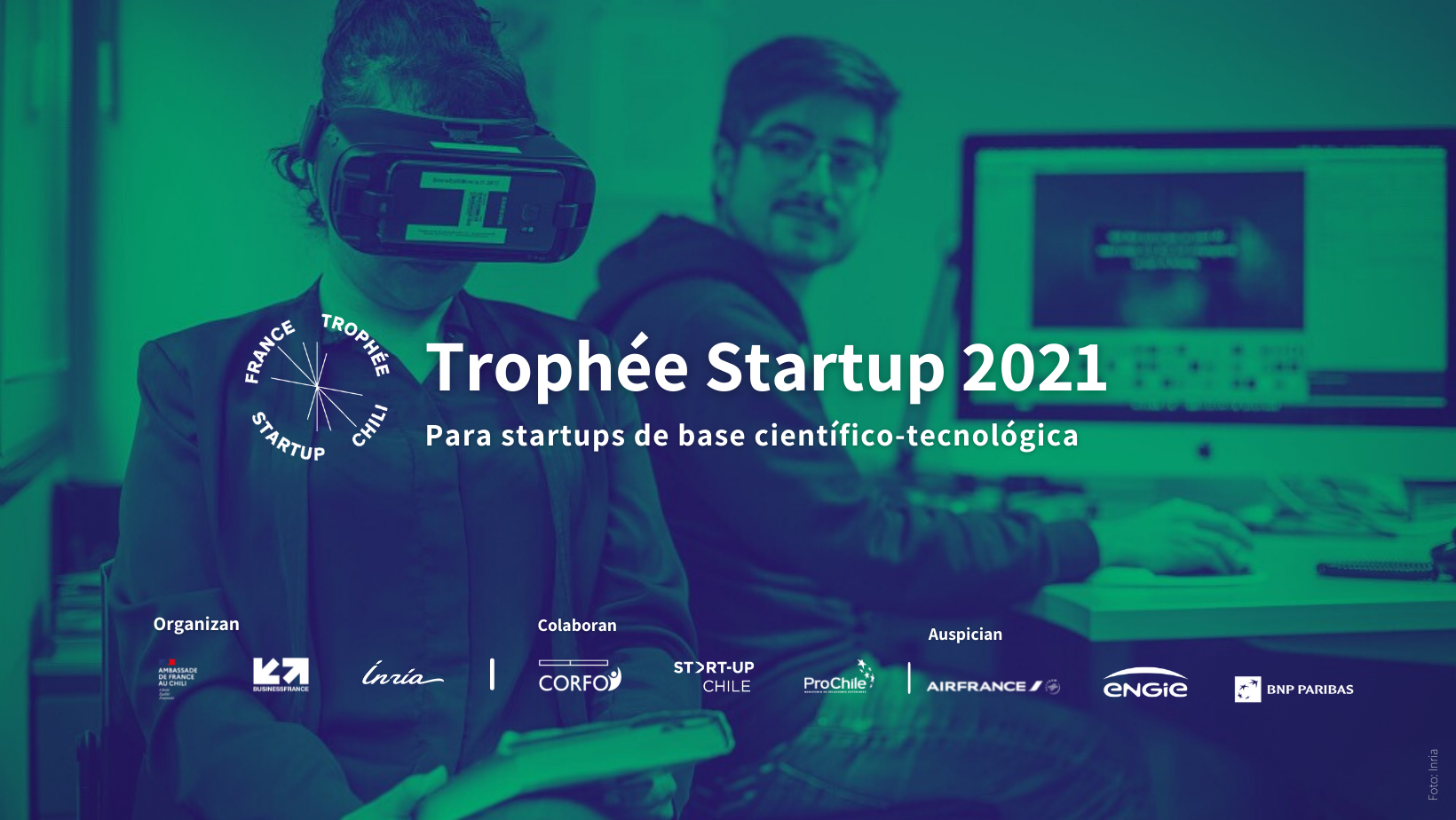 In 2017, the French government set itself the goal of turning that country into a “startup nation”. Just 3 years later, in 2020, France was chosen as the most attractive country in Europe for international investments and, the following year, it obtained the same distinction. On the other hand, according to the Global Entrepreneurship and Development Institute index, the Chilean ecosystem leads the ranking of Latin America and is in 19th place worldwide.

In this context, Inria Chile, the French Embassy in Chile, and the Business France agency have been organizing the "Trophée Startup" for two years now, a call that seeks to detect Chilean startups with significant potential for growth and internationalization and support them in their implementation process in the European and French markets, in addition to favoring networks and alliances between actors in the French and Chilean innovation and entrepreneurship ecosystems. The French ambassador to Chile, Pascal Teixeira, pointed out last year when selecting the winning startups that "bringing the ecosystems of France and Chile closer is our role, as well as promoting the young promises that we hear (...) Five of the six finalists are involved with climate and the three winners work very hard in the fight against climate change, so we hope that they will be successful in their projection with France”.

The winning startups of the contest benefit from a complete training and acceleration package in Chile and France to create the conditions for a potential implementation in France. In Chile, they have already benefited from a training and pre-internationalization program with continuous support and training sessions on digital technologies through the Inria Academy program; and the presentation of the French ecosystem and market, dictated by Business France.

The next step now comes in France, where part of the winning startups of the Trophée Startup 2020 and 2021 travel this week to expand their projects in the second largest market in the European Union. Diagnofast, one of the winners of the 2020 edition, Pewman Innovation, Suncast and Tetris4D, winners of the 2021 version of the Trophée, are now traveling to Europe. All companies focused on environmental solutions for various industries.

The pandemic and border restrictions had prevented the winners from traveling earlier, but the day has come. The projects will be from June 1 to 15 benefiting from a program tailored for them by Paris & Co, the innovation and development agency of the French capital, which each year supports the incubation of more than 500 new French and foreign companies.

In addition, between the 15th and 18th of the same month they will participate in Vivatech 2022, the largest innovation event in Europe and recognized throughout the world as an important catalyst for business transformation, the growth of startups and innovation for the common good.

The ProChile office in Paris, a Trophée Startup collaborating agency, is in parallel responsible for supporting startups in their search for meetings of interest to companies, and in particular so that they can meet with potential clients in France. One of the winners of the 2021 Trophée Startup is Enzo Galliani, with Pewman Innovation, an anti-frost foliar liquid based on Antarctic bacteria and nanotechnology for agriculture. This organic input protects crops from frost and its creator explains that “for a science-technology-based startup like ours, the fact of being able to interact so closely with the most relevant players in the area worldwide is a very valuable experience. Technological innovation is a very dynamic area, so keeping up to date with the latest technologies developed in these markets is crucial for us, something that we will achieve thanks to Inria by being accelerated by Paris & Co and participating in Vivatech 2022, the event Europe's largest technology company.

On the other hand, Juan Eduardo Valenzuela, from the Tetris4D project, pointed out that one of his expectations is "to be able to open an office in the heart of Europe, and have the possibility of accessing an extremely important market, where technology is gaining more and more importance and interest. This type of experience for startups gives us the opportunity to believe in internationalization, from Chile. A Chilean scientific-technological based company going out into the world”.

Along the same lines, Constanza Levicán, creator of Suncast and also part of the last edition, indicated that her international expansion strategy “will allow us to carry out the consolidation of services with current clients, as well as the search for new ones. For us it is important to promote our technology, as it has a direct impact on improving the performance of solar and wind plants, which are spearheading the energy transition”.

Finally, the CEO of Inria Chile, Nayat Sánchez-Pi, referred to the Center's role in the Trophée Startup. “The Trophée Startup aims to support the most disruptive Chilean science-technology-based startups in Chile that have a strong will and ability to internationalize in the European market and in particular in France. Today, in addition to rewarding the winning startups, they started their acceleration program and as Inria Chile we support them with a technology training day, within the framework of Inria Academy, which we hope they have taken advantage of and will serve them in their projection”, she concluded. .   The startups that will travel Pewman Innovation is a company that provides solutions for meteorological frosts that cause millionaire losses to many actors in the agricultural industry worldwide, from producers to state entities that subsidize losses. It has developed a 100% organic liquid biofortifier based on Antarctic bacteria and nanotechnology that protects agricultural crops from cold damage at low cost.

Suncast SPA is a Chilean company that applies artificial intelligence in renewable energies. Currently, it offers the “Generation Prediction” service, which allows determining the generation of energy in photovoltaic and wind plants with high-precision models to comply with the regulations of Chile and Mexico. Likewise, it offers “Predictive Maintenance”, which makes it possible to predict when and how many times the panels must be cleaned to optimize costs and automate operation and maintenance processes.

The other project of 2021 that travels is "Tetris4D", the first system in the world that maximizes the use of capacity of delivery vehicles and, simultaneously, plans the optimal route through AI, cubing and locating the load inside, considering all the variables (weight, volume, fragility and location) and order of descent. This allows preparing the optimized load, reducing manual planning processes, with the consequent reduction in vehicles and kilometers travelled. And, finally, the representative of the 2020 version of the Trophée Startup is Diagnofast, a biotechnological solution that responds to the needs of the wine, juice and food industries in general and allows the development of different tools that improve the control and detection processes of contaminating microorganisms in wine.